So they hanged Bill Gay

Another of the intriguing Dakota Territory communities that sprung up in the mid-1870s was Gayville. 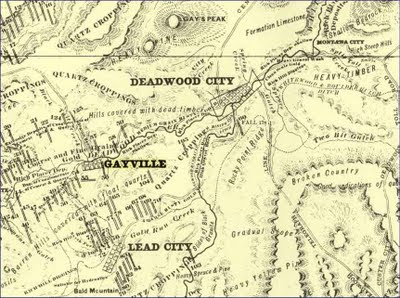 Not to be confused with the East River community that once billed itself as the “Hay Capitol of the World,” this Gayville was a Black Hills settlement – one of the many dozens that emerged from the mining mania that swept over the region in those days. As illustrated on this 1877 Rand McNally map, Gayville is nestled in the hills between Deadwood City and Lead City. A closer look at the map -- along with early photos of the town -- can be found in our Gayville Gallery.

It is perhaps the earliest town/camp in what researcher Jerry Bryant – President of the Lawrence County Historical Society – likes to call the “golden loop.” If you travel north from Deadwood to Central Central, you arrive in the vicinity of what used to be Gayville just before you come to the Maitland Road turn off on the right. As shown in the map below, if you stand facing Maitland Road, Gayville would be to your back, and the little camp of "South Bend" would be where the house is on the left side of the Maitland corner. 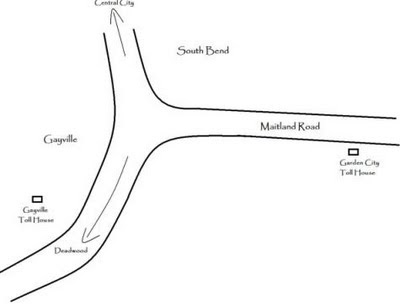 Gayville was platted in 1875 by Bill Gay and his brother, along with others.

By some accounts, Gayville sported some 100 buildings and was competing mightily with Deadwood, Central City, and other communities to become the center of commerce in the northern Black Hills. Bryant, who says he has “30 to 40 pounds of Bill Gay research files,” caught our attention when he allowed that the dapper Gay – shown here in an undated photograph taken in Helena, Montana – met his maker when he was hanged there for murder. That’s enough to whet the appetite of any researcher.

Was Gayville named for both Gay brothers or just Bill Gay? Was it an 1877 fire – described in a New York Daily Graphic news story by Adrienne Webster Davis – that nailed the coffin lid over Gayville? And who did Bill Gay kill? Bryant will soon be sharing more about Gayville and the town that is no more.