A recent inquiry about the cemetery near Roubaix, South Dakota prompted us to explore a bit.  We started with the narrative below, extracted from the 1994 booklet, Cemeteries and Graves in Lawrence County and Environs, published by the Lawrence County Historical Society and edited by Irma H. Clock.  The original information was provided by Ruth Kotti.  We then visited the cemetery, which is perched on a hilltop along Elk Creek Road just north of its intersection with Nemo Road.  We snapped a few photos, which are included below.
It was not unusual that even in the most unsettled areas of the American West, burial sites, the ordinary method of disposing of the dead came into being. It has long been observed that a hill or a knoll near frontier settlements was the common selection. The is located in a wooded area at the top of a hill, a short distance from the non-existent town of , which was also known as Perry. 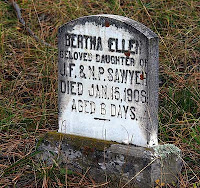 Even though some interments are recorded prior to the 1900’s, it is rumored that the land, possibly a mining claim, was originally donated for a cemetery by the Sawyer family after the death of their infant daughter, Bertha Ellan Sawyer, who was buried on January 1, 1906, at the age of 6 days. However, researching the Lawrence County Record of Burials reveals possible earlier burials at the site. Among these were: Patrick Mahr of Brownsville, buried near , on May 14, 1884; Henry Hilturen, 10 years old, buried at Perry, in August 1885; Oleans Johnson, age 38 years old, buried near the Sam Mine on September 7, 1885; and
Mrs. Sophie Amanda Pietila, born in 1850, and died October 5, 1888. 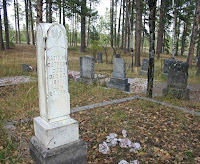 Although these people are recorded in the Record of Burials,  nothing substantiates these graves. The only confirmed burial is that of Mrs. Pietila, who has a large granite tombstone marking her grave, as well as the graves of two infant sons, Nels A., who died in October, 1887, at the age of 49 days, and Frank J., who died on October 26, 1888, at the age of 21 days.
Grave markers confirm that there were three infant burials in the1890’s. They were Hilda Balander, who was born in 1889, and died in 1890; Henry W. Pinske, born and died in 1895; and Mary A. Pinske, who was born and died in 1896.
Sometime in the 1970’s, in October, a visual survey was done by Mrs. Esther E. Salmon. She located at least 27 unidentified graves, several of the wooden markers were weathered and worn past reading. When another walking survey was done in 1990-1991, the results compared, the cemetery was found to have two hundred sixty-six marked graves that were identified and listed.
Besides the Sawyer infant, there were 12 other tombstones -- verified burials in the 1990’s. The burials include 7 infants/children and five adults, 3 males and 2 females.
An early day resident recalled the funeral procession (of) one of these young mothers. A team of horses pulled the heavy lumber wagon carrying the homemade pine coffin. Neighbors sang a mournful dirge as the cortege (procession) wound its way up the steep hill to the cemetery for committal.
Inscriptions on grave stones disclose that there were 22 burials between the years of 1910 to 1919, generally. According to the information etched on the gray granite monuments marking the graves of two WWI soldiers who died in 1918, one died in , and the other died at . During the flu epidemic of 1918-1919, indoor public gatherings were prohibited. An early-day former Lead mortician remembers one particular outdoor funeral ceremony, where the minister, bundled in a heavy coat complete with fur hat and mittens, stood in the box of a spring wagon as he preached. Mourners, shivering and shaking in the bitter winter cold, listened to the long sermon, which seemed longer because of the weather. 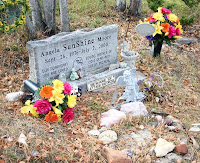 The is mainly the resting place of early day residents of the , Elk Creek, , Box Elder and vicinities.  Today, there are occasional additions to the family plots as well as other burials.
Elected to the governing board of the Roubaix Cemetery Association, which was organized in April 29, 1950, were: Esther E. Salmon, Mary Paananen, and John Hill. All board members were area residents. A fund had been started in May 1949 for a new fence. The board was chosen to supervise major improvements, cemetery maintenance, and the delegation of burial sites. In the ensuring years, board replacements have been: Ralph Rantapaa, Elma Quaschnick and Eva Haka. Currently, Mr. Rantapaa is the board president, Mrs. Quaschnick is the secretary, and Mrs. Haka is the present treasurer.

The dead who rest in this hallowed place -- who are they? They came from all walks of life and had various vocations to make their living. They were the parents who nurtured and, for some, buried their children. They are community leaders, the unsung heroes, those who served their country in all its conflicts, even a veteran of the Spanish American War. Then there are those who are buried there that are known only to God and to their loved ones they left behind, bone, but not forgotten.   ~~Information by Ruth Kotti.
~~~~~~~~~~~~~~~~~~~~~~
NOTE:  We've heard this cemetery referred to as the "Andersen Cemetery," so we were alert to any Andersen tombstones.  This plot for the family of  James C. and Petrine Andersen was particularly interesting.  It is shown in the photo above at right.  You can click on the image to see a larger version.  Note that their daughter Gladys Violet Anderson died in 1904, just a few weeks shy of her second birthday.  Her surname was engraved as ANDERSON, while markers for both her parents were engraved as ANDERSEN.

This summary of the 2010 West River History Conference was provided
by Shebby Lee, President of the organization.
~~~~~~~~~~~~~~~~~~~~~~~
Participants in the Eighteenth Annual West River History Conference were very pleased with the new venue according to the evaluations and feedback for the conference which ended September 25. The fully-equipped and modern classrooms enhanced the experience and were complimented by the lounge area with its cozy fireplace, and spacious ballroom where booksellers offered biographies and historic books for sale.
Presenters at this year's conference hailed from as far away as AZ, Texas, and NY. As always, attendees also came from the neighboring states of North Dakota, Wyoming, Nebraska and Minnesota as well as Kansas and all parts of South Dakota.
Attendance was also up over record-breaking 2009, and plans are already underway for next year's conference to be held Sept. 22, 23, and 24 at the Surbeck Center on the School of Mines campus in Rapid City, SD. Check our website often as plans are unveiled for another exciting conference in 2011.
2009 Award Winners
At the Friday awards luncheon, winners of the 2009 conference papers were announced. Winner of the best student paper was Emily Wicks of Faith High School, whose paper was entitled "Annie Oakley: Guns, Romance and Hardships". Second place went to Cassie Foster, Faith High School for her paper, "The Myths and Legends of Belle Starr, the ‘Bandit Queen'".
First place in the adult category went to Pat Moore of Chestnut Hill, MA, for her paper, "Answering the Call: Women Missionaires in the West, 1810-1900". Pat has donated her prize to the WRHC scholarship fund. Second place went to Jan Cerney of Philip, SD for her paper entitled, "Missionary Corabelle Fellows. Victim of the Yellow Press". Third place was awarded to Donna Fisher of Deadwood for her paper, "Pursuit of Art: Grace French, Pioneer Artist and Teacher". With so many excellent papers, the judges opted to award an additional Honorable Mention to Barb White of Herrick, SD, for "How Todd Lost His County (and Found it Again Out West)"
In addition to prizes for best papers, the conference presents awards to deserving promoters and preservers of history in our region. The Herb Blakely Award for outstanding contributions to local and regional history, a sense of American Patriotism, and efforts to further the concepts of good citizenship went to Mary Lewis of Wasta, SD. The Zoom Zoom award for outstanding support of local history went to Marcia Hill of Rapid City; and the Sandria Friske Helping Hand Award went to Grove Rathbun of Rapid City.
The conference was made possible with support by the South Dakota Humanities Council, an affiliate of the National Endowment for the Humanities, the Deadwood Historic Preservation Commission, Black Hills Corral of Westerners, International, the Society of Black Hills Pioneers, the Reptile Gardens, Keystone Historical Museum, Big Thunder Gold Mine, the South Dakota State Railroad Museum, Lewis Publishing and Dode Lee.