The old Deadwood fairgrounds, located near the “Roo Ranch” a couple of miles east of Deadwood towards Boulder Canyon, was the site of the first airplane landing in Lawrence County. 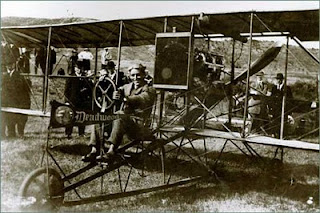 The year was 1912. It hadn’t even been nine years since the Wright Brothers soared their aircraft above the dunes at Kitty Hawk, North Carolina – marking a first in aviation history. And it would be some 15 years before Charles Lindbergh would make the first solo flight across the Atlantic Ocean.

A young Indiana stunt pilot named Art Smith (above photo) landed his bi-plane aircraft at Deadwood in the summer of 1912. The Pioneer-Times reported that Smith "bears the distinction of being the first man to successfully navigate an airship in the Black Hills." It was barely two years after his parents had hocked their Fort Wayne home for $1,800 so the 20-year-old could build an airplane.

By all accounts, the Deadwood landing was a grand event and was, fortunately, captured by photographers. This is one of several photos of young Smith, passed along to us by Jerry Bryant. We would like to extend thanks the Adams Museum and House for sharing them. You'll find other photos in our LCHS Gallery.

Smith biographer Rachel Sherwood Roberts recounts in her book, Art Smith-Pioneer Aviator, that the young aviator "was as celebrated as any Hollywood star...he glamorized and popularized flying while testing the boundaries of aeronautic principles." Roberts has written much about Smith, including an article entitled "The Smash-Up Kid" for the Indiana Historical Society. Smith made another trip to the Black Hills in 1913, bringing his new bride, Aimee, with him. The couple was treated like celebrities, and Smith showed Aimee the plateau from which he’d flown the previous year.
The “Historical Footprint” film series at the Roundhouse in Lead recently (1/16/10) showed a film of Art Smith landing his aircraft at the old Spearfish fairgrounds on one of his visits to the Black Hills. It was during his 1913 trip that Art performed in Edgemont during the Fall River County Fair.

Smith had quite a career. Although he was refused as an Army Air Corps pilot in World War I – probably because of numerous injuries he had endured prior to the war, and possibly because of his short stature. He was only 5 feet 3 inches tall. Following the war, he worked for the U.S. Post Office, flying overnight mail between New York and Chicago. He died when his aircraft smashed into a grove of trees near Montpelier, Ohio, in February 1926. He was 32 years old.

Smith was undoubtedly an inspiration to thousands of would-be aviators who witnessed his daredevil stunts as he traversed the country performing in air shows prior to World War I. He reportedly won the admiration of aviators like Wiley Post and Charles Lindbergh before they achieved their fame.

Early in the last century, probably around 1920 or so, a new park pavilion was built in the Spearfish City Park, located near the mouth of Spearfish Canyon. 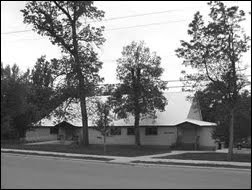 The frame structure has seen a wide variety of community events over its nearly century-long history. From chili feeds and boxing matches to roller skating and wedding receptions. But it’s probably best known throughout Lawrence County and across the region as a really hot spot for dancing. Henry Phillips and the Ambassadors out of Lead were among the more popular local groups playing at the pavilion during the Big Band era.

In the 1960s it was Rock ‘n Roll that stole the limelight. The Spearfish Park Pavilion – now named Tretheway Pavilion for former Mayor Wilbur Tretheway, who helped save the structure – attracted a long list of top-notch national performers.