From the intersection of Main & Hudson, looking north..  The old American National Bank is in the distance at left; the Matthews Block is on the right. 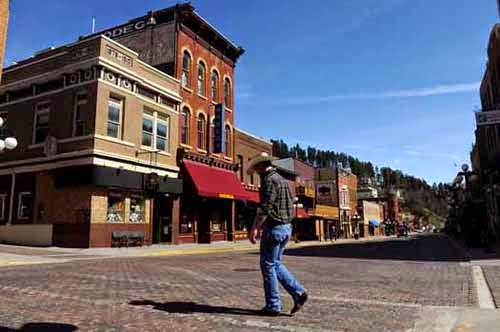 Rich in flavor but short on facts, the HBO television series Deadwood keeps bringing new visitors to town.  One of the folks quite smitten with the series was Emilie Rusch, who wrote about Deadwood in this story for the Denver Post.  Read Searching for the ghosts of old Deadwood in the Black Hills.

It was one of the more enjoyable meetings in recent memory, and society president Norma Kraemer dubbed it a "huge success."  And much of that success had to do with the special historic venue for the Lawrence County Historical Society and its 2015 spring meeting.

In this historical setting, LCHS members enjoyed a scrumptious buffet luncheon that was catered by the folks from Cheyenne Crossing, and their boss — David Brueckner — was there to make sure everything was as it should be.  And it was.

LCHS Norma Kraemer reaffirmed the society's recently-acquired status as a 501 (c)(3) nonprofit organization in the eyes of the Internal Revenue Service.  This is a move that is expected to bolster LCHS activities and fundraising capabilities.  She also heralded the most recent LCHS publication, "Lawrence County, South Dakota, Timelines," spearheaded by board member Mary Gallup-Livingston.

Three directors of the society were re-elected to new three-year terms.  They were Norma Kraemer, Jacke Mitchell, and Mary Gallup-Livingston.  Additionally, Norma Kraemer and Kim Keehn were selected as President and Vice-President, respectively.  Donna Watson was again tapped to serve as Secretary and Jacke Mitchell as Treasurer.  Congratulations and thanks to these good folks for their willingness to serve!

As a special bonus, door prizes were presented to several lucky members. These were historic topographical quadrangle maps produced years ago by the U. S. Geological Survey.  A tip of the hat and thanks to Mary Gallup-Livingston, who's been spending much time with maps of late, chronicling the schools of early Lawrence County.

The next general membership meeting for the Lawrence County Historical Society will be held at the Homestake Adams Research and Cultural Center in Deadwood on Sunday, September 27th.  Mike Fosha from the South Dakota Archeological Center will be featured on the program.  You'll be learning more about that in the weeks to come.

Attending "The Best Little Whorehouse in Texas" was the highlight of the day for many attendees.  The Gold Camp players did a fine job tickling our funny bones and demonstrating some exceptional acting and singing abilities.  It was very well done, and — of course — the venue made it really special.

This old building really is a treasure.  Homestake started construction in 1912 to include a library, swimming pool, bowling alley, meeting rooms, and of course the Opera House.  The facility was completed in 1914 and it became the hub of social and cultural activity in Lead and the surrounding area for some 70 years.    It was in 1984, however, that fire destroyed much of the theater, and it lay dormant for 11 long years.

We've posted a few photos of our visit to the Homestake Opera House in our LCHS Photo Gallery.  But what you'll see is just the tip of the iceberg.

So much has been done, and Director Sarah Carlson underscored that the next big step will be restoration of the Opera House stage, which is a focal point for activities in the facility.  To illustrate its heightened level of use, Carlson noted that some 70 performing arts events are on the calendar, along with five weddings, and more than two dozen bus tours.  They're also anticipating tours for some 600 elementary school students.  The ongoing restoration has definitely spurred increased activity and interest in the historic building.

The restoration has given the Opera House new life, and you can learn more about it and the Homestake Opera House Society by visiting their website at HomestakeOperaHouseSociety.org