A few weeks ago, the Friends of Case Library at Black Hills State University distributed the fall edition of "The Black Hills Historian."  It contains several interesting pieces, including an abbreviated version of the Johnson Siding story that we posted here last week.  The newsletter also offers a variety of helpful tips, including a "Highlighted Resource," which this time focuses upon Lawrence County tax records.  Well worth a visit.  There's also a feature called "Highlighted Collection," which for this issue is described in the article below by Dr. David Wolff and Roberta Sago.  Our thanks to both of them for allowing us to re-print their article here. 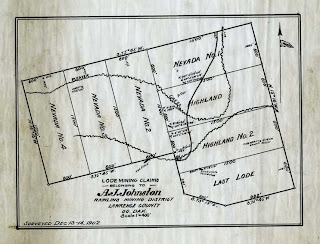 The first actual mining company to precede the BMMC was the Portland Mining Co., organized in 1880, but its production was limited because of difficulties in treating the area’s refractory gold ore. In 1911 the Portland Company purchased the American Eagle Mining Co., including its cyanide mill, and the property was reorganized as the Trojan Mining Co. From that time until 1923, the Trojan company produced about 300,000 ounces of gold. Rising costs caused this company to close, and the property underwent another reorganization, this time as the Bald Mountain Mining Co.

The new entity did some exploration, but actual production did not begin until 1933 when the government raised the price of gold to $35 an ounce. The increase allowed the company to do well, but only for a time. With the price of gold fixed at $35 an ounce through the 1950s, profits disappeared and the operation closed. The Wharf took control of the property in the 1980s when the federal government stopped regulating the price of gold, and mining again became profitable.

Wharf Resources, Inc. donated these records in 1987.  You can search the inventory of the maps online at:
http://iis.bhsu.edu/lis/specialcollections/search.cfm 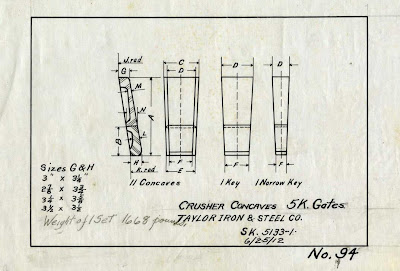 In addition to the materials donated in 1987, The City of Deadwood Archives donated 28 boxes of materials and nine ledgers to enhance the Wharf / Bald Mountain Mining Records collection.  These documents cover the company history from the 1930s to the 1950s.

NOTE:  Case Library is located on the second floor of the E.Y. Berry Library-Learning Center on the campus of Black Hills State University.  More information about the library can be found at:  Case Library.

A History of a Black Hills Sawmill

There are so many places across the region that have fascinating histories that it's hard to keep up with them.  And sometimes we drive right by familiar locations, not fully appreciating the history behind them.

Such is the case of Johnson Siding, nestled along South Dakota Highway 44 about 10 miles west of Rapid City.  Just over the county line in Pennington County, it's one of those places that we often hear about, perhaps frequently drive by, but without giving much thought to its history -- or how it got its name.

Fortunately, an Adjunct Instructor of History for Black Hills State University at the University Center in Rapid City has helped fill the void regarding Johnson Siding.

Erik Iverson researched and wrote the following article while enrolled in the Mountains of History (MOH) program supported by a grant from the U. S. Department of Education.  It was in collaboration with Black Hills State University, Mt. Rushmore National Memorial, the Chiesman Foundation, Crazy Horse Memorial, and Technology in Education (TIE) of Rapid City.  A resident of Rapid  City since 1984, Iverson graduated from Rapid City Central and earned a degree in Social Studies from Black Hills State University.  He has a Master's Degree in American History from Ashland University in Ohio and has taught in Rapid City Schools for 12 years.

Iverson's research into Johnson Siding is also a bit of family research.  His wife of nearly 20 years, Heidi, was a Johnson.  They have four children:  Emily, 14; Isaak, 11; Aaron, 9; and Aiden, 6. It was Heidi's great, great, grandfather Johnson whose name became indelibly linked to that special place called Johnson Siding.

Our thanks to Erik Johnson for allowing us to publish here his article entitled:

They Call It Johnson Siding:  a History of a Black Hills Sawmill

A peek at early education in Deadwood

Jerry Bryant, immediate past president of the Lawrence County Historical is a dogged researcher and frequent contributor to our on-line newsletter.

Jerry's latest initiative has been an examination of education in early Deadwood, and -- as usual -- he's found a bevy of interesting information that old-timers and newcomers alike will enjoy.  After poring through 10 years of archived copies of the Black Hills Pioneer and the Black Hills Times, Jerry offers a glimpse of early Deadwood schools -- and teachers.

Prominent among them was the lady Jerry identifies as the first public school teacher in Deadwood, Minnie Callison, whose early demise is described in Jerry Bryan's article. Click on the link below to read: