A bit of yesteryear ...Ice skating at Central City 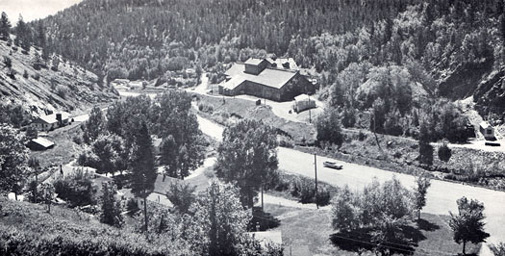 It may not have drawn the crowds that fill the ice rink at  Rockefeller Center in New York City, but the American Legion Ice Skating Rink in Central City, South Dakota was once a popular place!  That's the big building in the center of this photograph. (Thanks to the Homestake Adams Research and Cultural Center [HARCC] in Deadwood)

We're not quite sure exactly when the Homestake Mine closed Cyanide Sand Plant #2, between Deadwood and Lead (probably in the mid 1930s) but we've talked to many folks who remember visiting the spacious facility after it became home to a popular ice skating rink.

Documents at the Homestake Adams Research and Cultural Center (HARCC) in Deadwood reveal that the rink measured 60 feet by 360 feet.  According to information contained in the August 1963 edition of Sharp Bits, published by Homestake Mine, the rink was operated for many years by a local American Legion post.  What do you remember about this rink?  Drop us an e-Mail!   And you can take a closer look at the structure in our LCHS Photo Gallery.

Members get update on the Fassbender collection

Both the president and the administrator of the historic Fassbender Photoghraphic Collection visited with members of the Lawrence County Historical Society on Sunday (1/20/13) at the Homestake Adams Research and Cultural Center (HARCC) in Deadwood.

That's where a growing force of volunteers come three days every week to help sort through the massive collection of 800,000 historical images that were collected by the Fassbender Black Hills Studio operation over six decades.

Administrator Richard Carlson and Fassbender Board President Jean Martin, both of Lead, showed a variety of the pictures, negatives, proofs, and equipment that are all a part of the collection.  Carlson outlined the intricate process being used to preserve, protect, and prepare the collection for sharing with the public.

Purchased in 2011 by the cities of Lead, Deadwood, and Spearfish for $300,000, the materials were stored temporarily in a south Spearfish building until they could later be moved to a climate-controlled vault inside the HARCC.

More than 40 people have volunteered to assist with this massive undertaking -- but it's a process that will take time.

"By my early calculation, if we continued at the pace we started at, it could take up to 16 years to complete the project," said administrator Carlson.

But he noted that they've learned how to more effectively complete the process and save some time -- but just how long it will take is still a question.

"We've got to go through the hundreds of boxes, which have lots of 5 by 7 envelopes containing negatives, proofs, and sometimes prints," said Carlson.  Most of those envelopes have names and numbers that were used by the Fassbenders for filing their photographs.

Volunteers take everything out of those old envelopes envelopes, which are considered to be contaminated, and then carefully place the contents into acid-free paper envelopes.  The names, numbers, and other descriptors are noted on the new envelopes and passed to Carlson, who is putting the information into a database system.

"We're even photocopying the old envelopes, since they often have information noted on them that can later be of use," said Carlson.

He gave a demonstration of how materials will be digitally scanned for storage and then be made readily accessible via their computer database.  Eventually, the materials will be available on a web site.   Attendees to this meeting were treating to a PowerPoint slide show of Fassbender photos projected onto a screen before and during the program.  You'll find one of the Fassbender photos -- along with others from this quarterly society meeting -- in our LCHS 2013 Photo Gallery.

Carlson noted that the Fassbender Photographic Collection web site today is pretty rudimentary, but there are plans to expand it soon so that volunteers and the public can keep up to date with activities related to the collection.

There's been a growing interest in the old photos.  Samples from the collection have been reproduced and exhibited at various location in Deadwood, Spearfish, and Lead.

Earlier this month, Carlson spoke to the Spearfish Area Historical Society.  Also on the program were Spearfish writer Paul Higbee and Betty Fassbender Johnson.  Higbee gave some insight into the history of the Fassbenders, and Mrs. Johnson offered some first-hand insight into the family business that captured so much area history on film that future generations will be able to enjoy.

Society president Norma Kraemer observed that there may be some LCHS members who would like to volunteer for the Fassbender project, and after the meeting Carlson visited with several folks about their interests.

Kraemer also introduced members of the LCHS Board of Directors -- including its newest member, Cindy Solaas of Deadwood.  This meeting also featured another great luncheon served up by Dave Brueckner and his crew from Cheyenne Crossing.

The society is planning its Spring Tour on Saturday, April 27th.  Participants will visit the historic James Anderson Ranch just south of Whitewood for a brief tour before proceeding into Whitewood where a variety of events hosted by Whitewood citizens.

Then in May, the society will conduct its next quarterly meeting.  Keep an eye on this web site and local newspapers for dates, times, and further details.