More than 100 persons participate in the Fall Tour

The Greek goddess of the day, Hemera, smiled on the Lawrence County Historical Society's Fall Tour on Sunday, September 23.  People signed in for the car caravan with a total of 106 people participating in at least part of the tour.  While a car caravan of the size involved was akin to herding cats, everyone was extremely cooperative to make it work.  At our first stop 84 made it the half mile up the trail to the Friendship Tower.  After people had a chance to wander around and check things out, Marissa Karchut of the U.S. Forest Service gave a great presentation on the history of the tower to honor President Theodore Roosevelt.  After she was done,LCHS member Dr. David Wolff, who wrote a biography on Seth Bullock the instigator of the tower, added real depth the significance of the historic marker.

After everyone hiked down to the parking lot we ate our lunches and then headed downhill to the site of Deadwood Dick's cabin. LCHS member Michael Runge, the Deadwood Archivist, gave a thorough history of the Pine Crest Campground and Deadwood Dick's cabin complete with visual props that worked in a rustic setting.

The caravan headed out to the parking lot of the old Roo Ranch along Boulder Canyon, where Jerry Bryant discussed the short-lived Deadwood Harness Racing Track.  Then I talked about the first plane to fly at Deadwood in 1912, taking off from the same hay meadow as the racetrack and landing at the rodeo grounds in Deadwood.

The last parade of cars headed back toward Deadwood and turned right on Whitewood Creek Road.  Much of the road is an old railroad bed with several railroad bridges converted to automobile traffic.  Eventually, Jerry Bryant said it was time to park and explore on foot.  So members explored the railroad tunnel, Barker's Cave, and observed the Natural Bridge from near Barker's Cave across the narrow valley.  Heading back to town we could see the site of Montana City, the slag pile, and the location of wagons being lowered into the canyon before modern roads were constructed.

A good time was had by all. One man signing in at the start reported that he had given up Sunday football to bring his family on the tour.  I suspect he didn't regret his decision to see the gorgeous fall leaves and scenery that graced the entire trip.

Now we need to plan where we are going for the Spring Tour! 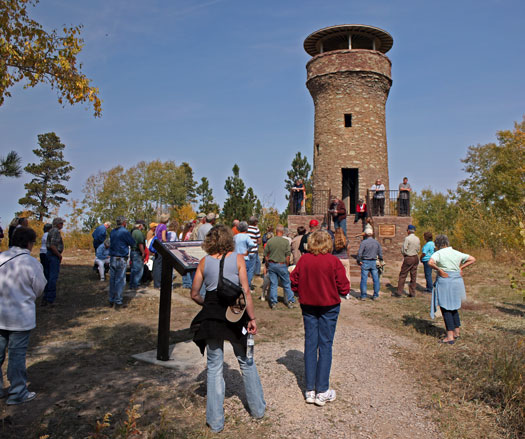