Searching for a photograph of Sid's Halfway House 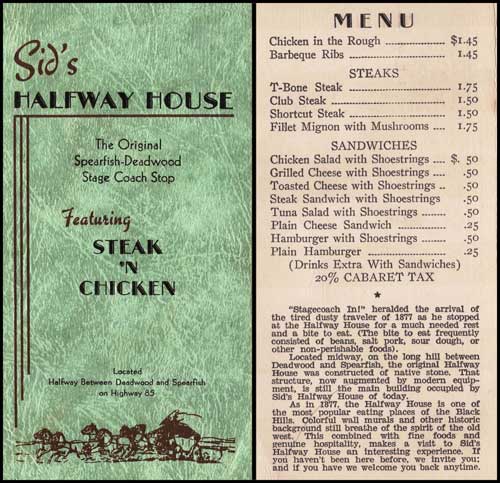 Historian and good friend Jerry Bryant of Deadwood is on a mission:  find some photos of Sid's Halfway House that was once located along U.S. 85 midway between Deadwood and Spearfish.


The brief description above indicates some attractive offerings for the right price, although we're not sure of the exact date that of this menu.  If you can a few old photos or clues that might help us track down photos of Sid's Halfway House, please send us an e-mail.  Thanks! 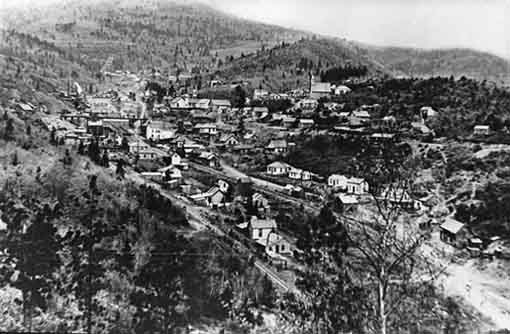 Terry is described in the Belt Cities Directory for 1908-09 as follows:

“Terry, since 1891, has been one of the important small towns of the Hills.  The town is located four miles from Lead, and seven miles from Deadwood.  The altitude of Terry is the highest of any town in the Black Hills, being 5,700 feet above sea level.

There have been some rich discveries near Terry, and the Golden Reward and the Horseshoe Company are in possession of almost all the valuable property at present.

Another good producing property is the old Buxton property, now owned and operated by Lundberg-Dorr and Wilson.

There is also a strong organization of Western Federation of Miners, with about 800 members.”

This was the highpoint of Terry’s existence; the 1910 census lists terry with 1177 people.  The first listing is in 1895 with 500 people; the population dwindled to 174 in 1925, and after that the people were called a part of “Lawrence County Unorganized.”

In 1981 there are about a dozen families living in Terry Gulch.

EDITOR'S NOTE: A recent inquiry from Nebraska asked about the old mining town of Terry, which was once perched high in the hills west of Lead.  This person, a Bennett family descendant, conceded that he was aware that Terry no longer exists as a town, but he was curious to know more about the community.  So we offer the above bit of information and photograph, originally printed in Some History of Lawrence County, the out-of-print book that was published in 1981 by the Lawrence County Historical Society.