Born in Killingly, Connecticut, April 14, 1837, Jabez Chase grew up on a typical New England farm and by age 23 was employed as a shoe maker in a local shop.  He married Harriett Amanda Slater on July 28, 1860 in Killingly, and soon started a family.

As a young boy, Jabez would listen to stories of gold prospecting in California from his brother-in-law, Ebenezer Darling.  In the early 1860's he, his wife and young son embarked upon a trip to the west coast.  After spending a few years in Sacramento, California, the family moved to Tacoma, Nevada.

Around 1871, his wife Harriett and their two daughters Alice and Leonnie returned to Connecticut.  Jabez stayed in Nevada for a while but eventually made his to the Black Hills, Dakota Territory to seek his fortune. 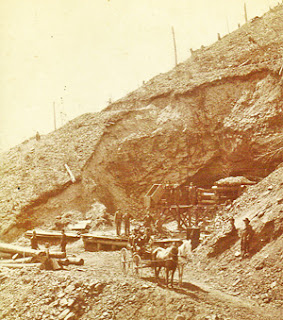 In November of 1876 Jabez Chase and a group of men came together in Cheyenne, Wyoming to form the Black Hills Gold Mining Co. The Hidden Treasure and Esmeralda mines (the Esmeralda is shown at left in about 1880) were two early mines operated by the company.

One of the first rock crushers in the Black Hills was set up by the Black Hills Gold Mining Co. to pulverize gold bearing quartz.  Mr. Chase became a well know hard rock miner and was involved in many other enterprises throughout Lead, Deadwood, and Central City area. One such enterprise was as the owner and operator of the Gayville Toll Road in 1882.

By 1884, Jabez Chase had relocated to Idaho as the owner /operator of the Hailey Ore Concentrating Company and was also involved in several enterprises throughout the Warren Mining District.

The early 1890’s would find Mr. Chase prospecting in Mexico where he died in June of 1918.

Although Jabez never returned to live in his hometown of Killingly, Connecticut, he regularly sent money to support his family.

EDITOR'S NOTE:  Our thanks to R.C. Adams for sharing these photographs and information with us.  You'll find addition photos related to this story in our Historical Marker Gallery.