Another Toomey property bites the dust…


We were surprised and a bit disappointed to just learn that we've lost yet another bit of Black Hills history.

Actually, the demise of Toomey's Mill in Newcastle, Wyoming occurred last year, and its passing has been lamented by more than just a few folks who either worked there, did business there, or in recent years enjoyed a meal there.   My wife and I fit into the last category.

Since retiring to the Hills more than eight years ago, we've tried to visit as much of the region as possible.  In fact, we nearly entered into a contract to buy a home on "Whoop-Up" Road near Newcastle in retirement -- but opted for Spearfish instead.

Nonetheless, we've passed through Newcastle numerous times, going and coming from family visits in Colorado.  Usually, it's simply to gas up and move on -- seems we're always in a hurry!

Seems it was Mother's Day in 2010 when we last stopped in Newcastle and had dinner at the Toomey's Mill restaurant.  Despite the fact we arrived near the end of the day, we enjoyed our meal -- and the historic vibrations of the old mill.

Friend Don Matthesen, with whom we frequently explore museums and other interesting locales around the region, alerted us to the regrettable fate of the Toomey Mill this week.  Thanks to KASL for the photo at upper left, which shows part of the demolition of the venerable structure.  The Newcastle mill had a direct tie to Spearfish through long-time businessman Daniel Toomey.   By the way, you can click on any of these photos to see a larger version. 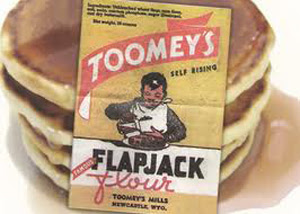 Interestingly,  we were reading about Toomey just a few months ago while conducting research about pioneer Deadwood attorney Henry Frawley.  It seems that Frawley, one day 113 years ago this month, happened upon a buggy accident near his ranch in Centennial Prairie southeast of Spearfish.  The injured persons was another pioneer businessman…….Daniel J. Toomey!  Frawley summoned help and Mr. Toomey recovered from his injuries.

Nicole Lebsack and Stephanie Lowe have written a nice summary about the history of the Toomey mill operation in Newcastle.  You can access it on this link to Wyoming History.