When Wyoming historian John F. Freeman once drove from Rapid City westward into the Black Hills, he became a bit frustrated with what he saw. 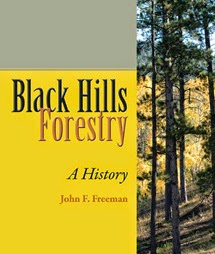 "My first impression was.....this is the most crass, commercialized area I've ever seen.  I couldn't really see the Black Hills, because of the billboards."

To be sure, Freeman was among many people who agonized over the manifestations of blatant commercialism in our region.  But over time, his views took on a new perspective, which he reveals in his book, "Black Hills Forestry -- A History," just published by the University Press of Colorado.

We just learned of the book after hearing Freeman interviewed by Wyoming Public Radio reporter Melodie Edwards.  (We've had a long and supportive relationship with South Dakota Public Broadcasting, but we sometimes re-tune our radios to listen to Wyoming Public Radio -- a bonus for folks living on the northern slopes of the Black Hills, not far from WPR's transmitter near Sundance.)

Freeman shares his views on the unique development of the Black Hills -- not just as a tourism magnet, but also as a rather successful experiment in becoming the first national forest in the country where timber was sold commercially without selling the land.

In many ways, Black Hills National Forest has become something of a model for the management of all national forests.

And Freeman gives much historical credit to French forester Gifford Pinchot, who today is regarded as the "Father" of the U. S. Forest Service.  Pinchot had visited the Hills in the wake of the Gold Rush years and focused his attention on ways to turn things around using "scientific forestry."  He was appointed by President Theodore Roosevelt to be the first head of the U.S. Forest Service, leading the agency from 1905 to 1910.  He later served two terms as Governor of Pennsylvania.

Hear a short interview with Freeman at this link to Wyoming Public Radio.